Emergence of the Cicada Killer Wasp

Beginning the week of 7/22/19 the Cicada Killer Wasps have begun to emerge and be spotted around the parks. These large, intimidating wasps are uninterested in humans and don’t act aggressively unless threatened. The biggest danger these wasps pose is if stepped on by bare feet or handled roughly. All wild animals should be treated with caution, and these wasps should not be handled. With this caution in mind the Cicada Killers have a fascinating life cycle that park goers can appreciate from a safe distance.

Appearance:
Cicada Killers are one of the largest species of wasps in the Eastern United States. These wasps can grow up to 2 inches long, with females being generally larger than males. Their abdomen (back section) is a long oval shape tapering to a point at its stinger. The coloration of the abdomen is black with three distinctive, irregular yellow bands that appear broken in the middle. Their thorax (middle section) and head are black in color with reddish accents. The Cicada Killers have 6 pairs of legs and two pairs of wings that are reddish brown in color. The fore-wings begin in the thorax and extend almost the entire length of the wasp.

Life Cycle and Behavior
Cicada Killers earned their name through their use of Cicadas as food for their larva. They emerge from burrows in the ground in June and July and live for around 2.5 months, dying off in the fall. Males may seem more aggressive than females but are not hostile towards humans, though they may investigate people in their territory. Fortunately males lack stingers. Male cicada killer wasps primarily defend their territory from other insects or appear in groups competing for females. 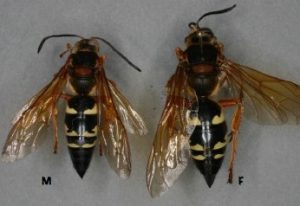